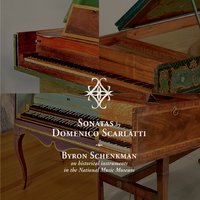 From the CD sleeve: "This is the second of two programs I recorded at the National Music Museum in Vermillion, South Dakota, in August of 2014. For The Art of the Harpsichord (BSF171) my object was to showcase a wide variety of antique harpsichords from the collection, matching repertoire as closely as possible to each instrument. For this second program I decided to explore the work of a single composer on three different harpsichords and an early piano, to hear how the music would be informed-or perhaps transformed- by these wonderful 18th-century instruments. I love the music of Domenico Scarlatti and it seemed like the perfect choice for this project. The two very contrasting Portuguese instruments recorded here are much like instruments Scarlatti himself would have played; and his music had become popular in London and Paris by the time the Kirckman and Germain harpsichords were built in those cities.

The child of a famous opera composer, Domenico Scarlatti was a virtuoso harpsichordist who condensed much of the wit and drama of contemporary opera into each of his more than 550 keyboard sonatas. He also incorporated folk elements from his native Naples, and especially from the Iberian Peninsula, where he spent most of his career in the service of Maria Barbara, the Portuguese princess who became Queen of Spain. Maria Barbara was Scarlatti's principal student and she must have been an impressive keyboard player given the difficulty of the sonatas Scarlatti composed as exercises for her study. Scarlatti seems to have had unlimited imagination, and the variety among these hundreds of miniature masterpieces is astounding. He himself described his music as "ingenious jesting with art" and indeed these sonatas are great fun both to play and to hear. Enjoy!"